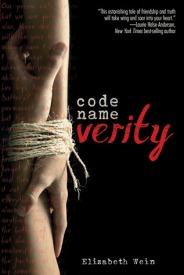 Wein’s amazing WWII-era novel centers around two highschool-aged girls from very different upbringings.  Maddie loves to spend her free time working with engine parts and fixing up an old motorcycle in her grandfather’s repair shop, while the narrator, at first known only by the code name “Verity” is a boarding school princess descended from Scottish royalty.  Both are incredibly brave, however, and volunteer to serve in the British Air Force–Maddie as a pilot and Verity as a communications specialist.  After a mission they are both a part of is compromised, Maddie is reported as missing while Verity is captured by Nazi soldiers.  As Verity is imprisoned, horrifically tortured, and questioned, the reader starts to realize that both girls are very different from who they originally appear to be, and that there have been very dangerous lies thrown around to all of the wrong people.  In Wein’s novel, concepts such as truth vs. lies and good vs. evil are closely examined and blown apart, since perception changes depending on which side you are fighting for.  She also wonderfully illustrates the perils faced in WWII, when operatives couldn’t even tell their best friends their real last name, or their true assignment.  Without giving anything away, I want to just say that I had heard there was a twist, and OH WOW, there really is!!! Fans of historical fiction will want to devour this in one sitting.