Can’t get enough of The Hunger Games? Well then the next book on your list should be The Testing by Joelle Charbonneau.  I have to admit I was so involved with this book that I stayed up  late to finish it because I just could not wait.  Now that I have said that, I’m ready to be a little bit critical.  This is another YA dystopian novel- I’m not sure how original you can get, but this one is very similar to The Hunger Games (they aren’t even trying to hide it- just check out the cover!).  This can be looked at as a positive or negative thing, because after all, THG was a huge success.  The Testing is a well written fast paced read; so get past the cover and give it a chance.

The main character Cia is chosen upon graduating for the privilege of taking the test to go to university in the capitol, Tosu City.  She has dreamed of following her father’s footsteps and going to university for her entirelife, but when she is accepted her father tells that his specific memories were erased but lingering nightmares from his own testing still haunt him.  These words foreshadow the rest of the novel as the stakes could not be higher- her life. 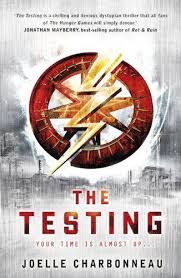