She is desperate for her parents to turn the carriage around and tell her they are only trying to scare her. Scare her into stopping her experiments, which tend to set things on fire! But Georgiana’s parents don’t stop the carriage. They take her to Stranje House, where she and her parents meet Miss Stranje who runs a school for unruly girls. Girls their families have given up on. 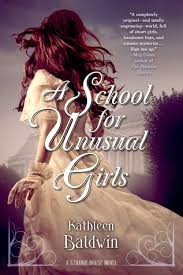 Much to Georgiana’s horror, her parents leave her in this awful place with real threats of torture around every corner. However, as Georgiana quickly learns, appearances can be very deceptive, in Stranje House as well as beyond.

A School for Unusual Girls by Kathleen Baldwin is clearly the first in a series of books about girls who have special talents and some may even have mystical powers. This is all set to the backdrop of the Napoleonic Wars, and also has some alternative history thrown in to spice things up. The reader meets a whole cast of young ladies who have been spurned by their friends and families, only to find that while they might not have fit in anywhere else, they do fit together.

Each girl looks like they will have their own romance and Georgiana is no exception.

Recommended for 7th grade and up.

One Response to “Sent from Home”