It is 1943, and Max and Alicia Carver are growing up in Spain while World War II is raging around them.  For the family’s protection, their father decides to relocate from the city in which they live to a small coastal town.  From the first day they move into their new home, however, Max and Alicia can sense an eerie, ghost-like presence.  Their younger sister finds a cat with giant golden eyes who seems to have a connection with the house.  Max discovers an overgrown sculpture garden made up of statues of creepy-looking circus performers that form a circle around a terrifying stone clown- a stone clown whose position changes overnight and who Alicia saw in her dreams before the family moved.  In addition, Max and 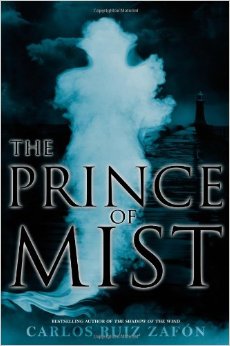 Alicia see the dreamlike outline of a ship in the mist over the ocean… but it seemingly appears and disappears at random.  After Max and Alicia meet a friend in town named Roland, the three start to uncover a horrifying mystery involving the spirit of Jacob Fleishman- a young boy who drowned off the coast of their house, a boat which capsized almost thirty years earlier that was full of traveling carnival performers, and a legendary figure known as the Prince of Mist- a man capable of granting wishes, but demanding horrible payments in return.  This novel is part mystery, party ghost story, part horror… and will keep you creeped out and looking over your shoulder the whole time you are reading!

One Response to “Who is the Prince of Mist?”