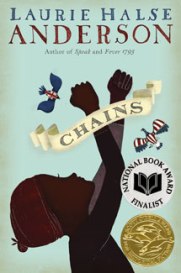 This novel begins in 1776, at the start of the Revolutionary War. Although the novel opens with a funeral, this actually seems to be a positive occurrence for two sisters named Isabel and Ruth. Isabel and Ruth are slaves, owned by Miss Mary Finch, who long ago confided in them that she was sick, and close to death… and planning to free both of them in her will. Their hope, however, is destroyed because Miss Finch’s lawyer is in Boston, trying to calm an uprising that will eventually blow up into the Revolutionary War. With no documents and no one to support their claim that they were to be freed, Isabel and Ruth are sold to a cruel, heartless couple in New York who pretend to be American Patriots but who truly are loyal to Britain. When Isabel overhears them plotting with other local families to assassinate George Washington, she decides to risk her life to become a Patriot spy. She is hopeful that she will eventually trade enough secrets to buy her and her sister’s freedom… until the unthinkable happens to Ruth. Read this amazing book, and the sequel Forge, to find out what happens to this brave young woman fighting for control of her life.

One Response to “Fighting to be Free”