Filed under: Nonfiction Titles — oneilllibrary @ 10:34 am 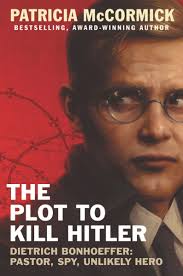 officials in the German government wanted Hitler gone or stopped. However, Hitler was very quick to put down anyone who spoke out against him and because of this, many plots had to go “underground.”

An area that doesn’t get much discussion in history classes is the role that the Church could have taken in trying to halt the progression of Hitler’s regime. A man named Dietrich Bohnoeffer was very aware that if the Church came out against Hitler’s policies of discrimination against Jews and others, it was possible that the general population would have followed suit and made things more difficult for Hitler and his men. Dietrich brought this concern to the Church leadership’s attention time and again. However, his pleas fell on deaf ears. This dismayed Dietrich so much that he even went as far as to start his own Church.

Interestingly, most of Dietrich’s family became involved in a plot to remove Hitler from his position as early as 1938. In fact, as a pastor, one of his brother-in-laws came to him with the moral question, was it okay to commit murder if it was to kill someone like Hitler? This was a question that Dietrich, as a pacifist, wrestled with. He believed that the work of Gandhi in India was the way to defeat Hitler and the Nazis. However, others believed that nonviolence methods could not work against Hitler. Finally, Dietrich came to the same realization and joined his one brothers and two of his brother-in-laws in their secret plot to assassinate Hitler.

The Plot to Kill Hitler by Patricia McCormick is a fast paced thriller in a nonfiction package. As readers we find out at the beginning of the book that Dietrich and much of his family were caught in their plot to kill Hitler and executed, however, the amount of times that Dietrich could have saved himself but stayed his course were numerous. The tragedy of their family is that most of them were killed within a few weeks of the end of the war.

Recommended for anyone who is fascinated by World War II, Hitler, or what life was like in Germany during that time period. Grades 7 and up should enjoy this title.