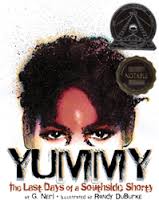 They called him Yummy because he loved sweets. He slept with a teddy bear and stole kids’ lunch money, broke into houses, cars and anything he could get his hands on. He was eleven years old when he killed a girl. He was elven years old when a 14 and 16 year old killed him.

His real name was Robert Sandifer and he lived in Chicago in the mid 1990s. It was there that he got an education in the darker side of life. What is a boy to do when his father is locked in jail and he has been taken away from his mother because of abuse. His grandmother loved him, but she had up to 20 other grandkids to look after as well. Often Yummy would take off for days and only return when he wanted some love and a safe place to sleep.

The Black Disciples – a gang in Chicago – liked to recruit young kids. They couldn’t be tried as adults and as such could do a lot of things without being locked up for the rest of their lives. The gang used this to their advantage and had the younger kids, or shortys, do a lot of their dirty work.

One afternoon, Yummy came across some rival gang members and pulled out his gun. But instead of shooting the gang members, he killed a 14 year old girl named Shavon Dean. Thus began a huge manhunt in the city of Chicago for an eleven year old boy.

Yummy: The Last Days of a Southside Shorty by G. Neri is a powerful fictionalized graphic novel account of what went down in the hot summer of 1994. The reader is faced with the question, was Yummy the victimizer or the victim?

Highly recommended for grades 7th and up.