Her mother had it hard, being a single mother in South Korea. When Chuna was little she didn’t understand just how bad the sigma was, however as she was going to school and got older, it became apparent quickly that to be a child without a dad at home was considered very strange. This made things really hard for both of them living in South Korea. 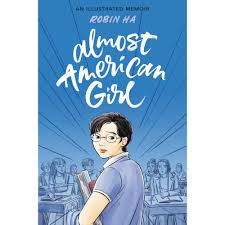 When Chuna and her mother decided to go on a trip to American and to the state of Alabama, Chuna didn’t think much of it. After all, she and her mother were always going on trips outside of South Korea. However, when her mother tells her she is going to marry a man and they are now going to live in America, Chuna’s world falls apart. She knows hardly any English, and her new “cousins” and stepsister are distant and not open to helping her at all navigate this new world.

Almost American Girl by Robin Ha is a coming of age story where a girl struggles to find herself in two worlds that she doesn’t seem to fit in. How do you find your place when you have no place? This is a graphic novel and based on the author’s real life experiences of living in two different countries.