Filed under: Historical Fiction — oneilllibrary @ 8:00 am 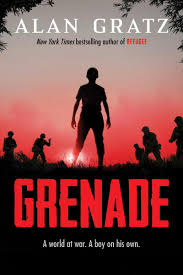 Okinawa is a relatively small island off the southern tip of Japan, but at the end of World War II it was the place of the last and bloodiest battle of the whole Pacific Ocean war.

Ray is a young American marine trying to find his way on this lush green island that the United States is about to invade. His father tried to talk him out of joining the military, but he felt it was something he had to do, plus it also meant getting away from his dad. He isn’t prepared though for the true horrors of war.

Hideki is a native Okinawan and he and his family have been separated due to the war. His father and sister have been forced to help the Japanese who took over the island years before, and his mother and little brother were evacuated on a ship heading for Japan. Hideki has stayed behind with a bunch of other boys around his age of 14 to become part of the Blood and Iron Student Corps to fight for the Japanese Imperial Army. However, Hideki realizes very quickly that the JIA has no real intention of trying to help any of the Okinawan and in many cases will use them in horrible ways.

Both Ray and Hideki struggle to find footing in this new war torn world they both exist in.  The question is what toll will this take on both of them, and will they make it out alive?

Grenade by Alan Gratz is a really good World War II historical fiction read. It gives a clear picture of both sides of the conflict and how confusing things were on the island and just how terrifying and dangerous too.

2 Responses to “An Island Torn Apart”