Caitlyn is not happy when her mom tells her they will be moving from New York to a rinky dink little town in the middle of nowhere Vermont. Without even consulting Caitlyn – about any of it! Caitlyn had a hard enough time starting middle school in sixth grade with people she knew, but now she’s expected to start 7th in a strange new place with all kids she’s never met before? Caitlyn has a list of rules that her friends back home helped her come up with – to make sure she fits in right away.

However, as soon as she meets her follow 10 classmates – yes, TEN – as in there are only 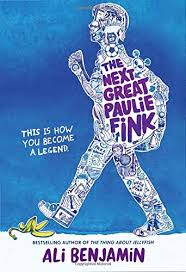 TEN other kids in all of the 7th grade – Caitlyn realizes her list isn’t going to help her much. There aren’t enough kids for there to be any specific groups, let alone any kid who even remotely reminds Caitlyn of anyone from home! The school is housed in an old mansion and they still have recess and at lunch all the older kids have to sit with younger kids and babysit them. It just seems to get worse and worse.

But the thing that gets Caitlyn right away, is how all the 7th graders miss a boy named Paulie Fink. It’s all they can talk about. How he used to pull these amazing stunts and he was so good at pulling pranks on even the teachers. Everyone misses Paulie Fink – everyone but Caitlyn who never even met the kid. Yet, one day an idea takes hold of the group and they decide they will find a new Paulie Fink. And guess who they put in charge of locating a new one? Yup, Caitlyn.

The Next Great Paulie Fink by Ali Benjamin helps us all see where our little attempts to fit in might actually be us just being mean. What happens when we realize the people we think we want to push away, are actually the people we want to bring closer.

Recommended for grades 6 and up.