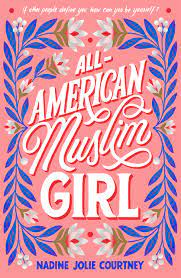 Allie is struggling after witnessing her father being the victim of prejudice on an airplane flight to visit relatives. She has always known people are prejudice, but to see it happen right in front of her, was very hard. Her father was raised Muslim and still identifies as that, even though he isn’t religious and doesn’t practice it. Her mother converted to Islam when she married Allies father. Allie’s dad never bothered to teacher her Arabic, so she can’t talk with her own grandmother, and this has been bothering Allie more and more. Where does she fit into the world?

Allie decides she wants to pursue learning about her religion, Islam. She reaches out to some people at school and as she dives deeper into learning, she finds herself with more and more questions. She worries she is hiding too much. From her father, from her friends, and maybe especially from the boy she is beginning to like, a lot, named Wells.

All-American Muslim Girl by Nadine Jolie Courtney is a fabulous read focusing on what it feels like to be on the outside of anything and wanting to be a part of something greater than yourself.

Highly recommended for grades 7 and up.