This book is perfect for any fantasy lover who is looking for something funny instead of dark! Anya is in a terrible situation. Since her father’s passing, she has been left with her evil stepmother– who has recently gotten remarried. So, she now has an evil stepmother AND an evil stepfather! On top of this, Anya has a super weird magical ability– she is able to break curses with a kiss. This might sound great, but she’s getting a little tired of kissing everyone in the kingdom who has been cursed and is now covered in gross pus-filled boils or who has been magically turned into animals (they don’t call her Frogkisser for no reason!).

But Anya is a princess and her duty to her people will always be more important to her than her own happiness. Now, though, her new evil stepfather has decided to claim the kingdom as his own. Her kingdom! Anya decides to leave on a quest to find a group of magical wizards who will free her kingdom for good. Along with a boy who has been turned into a newt and an amazing talking dog, Anya will prove that even the strangest abilities can give power to those who want to use them to do good.

Arthur Penhaligon has terrible, dangerous asthma. He has to keep an inhaler with him at 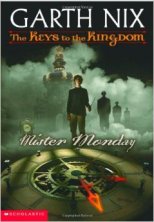 all times, and has been warned to not engage in physical that will make him breathe too hard. However, on his first day at a new school, the gym teacher yells at him for not keeping up with the rest of the class during a run. He tries, and collapses when his throat begins to close! Arthur is sure he is going to die and experiences a dream or hallucination in which an old, stooped man is pushing a young, handsome man in a wheelchair. The handsome man hangs Arthur a key fashioned to look like the minute hand on an antique clock, and tells him it will help him breathe. When Arthur comes to after this strange dream, he is still clutching the key, a mysterious locked book, and is now able to control his breathing. Weirder things begin to happen… a plague seems to be spreading, and Arthur is being hunted by men with the faces of dogs and blood-covered wings who want the key he was given back. They have been sent by the dark Mister Monday who still has the Hour Hand key and needs the Minute Hand key back in order to keep ruling a mysterious old house that might contain a universe within itself… Can Arthur, along with his two best friends, steal the other key from Mister Monday and save the universe? This exciting book for fans of Harry Potter will keep you guessing until the very end!

Coming in October is the release of Goldenhand, Garth Nix’s chronological continuation of his beloved Old Kingdom series. In anticipation of this dive back into the intoxicating realms of magic, duty, and sacrifice, I would like to recommend my personal favorite of this series. Clariel is the only book in the Old Kingdom series which is not a continuation of the storyline, but rather a journey into the origins of elemental magic.

Clariel is set 600 years before Sabriel, and the Old Kingdom is very different from what it will come to be in the future. Due to generations of prosperity and relative safety from Free Magic creatures, members of the Charter have grown lax. King Orrikan shirks all royal duties, hiding in his palace, while the Abhorsen is rumored to fear his connection and rightful control over the realms of Death. Seventeen-year-old Clariel, who is capable and brave, is utterly uninterested in politics, material possessions, and the intricacies of the Charter. She lives for the wild solitude of the Great Forest. However, due to blood ties to both the King and the Abhorsen, many conspire to use her for their own purposes. Clariel as constantly torn between a sense of duty, a desire to forge her own path, and a raw “berserk” nature. In contrast, Free Magic entities are presented not as villains, but ethereal, elemental beings whose understanding of morality differs greatly from humans. Savvy readers will figure out what Clariel is to become long before the change occurs in the novel. However, this sensitive rendition gives readers a greater understanding as to how a strong force such as Clariel is ultimately drawn to the untamable power of Free Magic and necromancy.

Currently, I’m involved in the new (well newer) series by Rick Riordan, The Kane Chronicles. I’m on the first book, The Red Pyramid. Now, I will confess, I’m not super into this book, except for Saddie, who is a hoot and holler. I know if I end up booktalking this book, she will be part of what I read out loud for sure! I felt the same way about The Lightning Thief. Just too much running around and peril all the time for me, I guess. But as I’m reading this book, which is really popular in our library, as well as Riordan’s other newer series – Heroes of Olympus – I realized I have a perfect recommendation for students who are looking for a completed series while waiting for the next installment from Riordan for either of his series.

Garth Nix has a series called Keys to the Kingdom which starts with the book Mister Monday. In it we meet Arthur Penhaligon, a sickly boy, who is late starting school – at a new school – because he has been ill with asthma. On the first day, he is asked to go running, which he knows will bring up his asthma again, but the gym teacher has no pity and makes him run anyway. As he is running he has an attack, and while he is lying on the ground in what he is sure will be his final moments, a strange being appears pushing a man in what appears to be some kind of old wheelchair. They give Arthur a key because,as he is listening to the 2 men argue, they believe he is moments away from death. But something happens when Arthur touches the key. He lives. And thus begins his strange journey to – what else – save the world.

Any fan of Riordan’s newest series’ should take time to explore author Garth Nix’s Keys to the Kingdom. It will be a  worth while journey.