This was a quick little read that had a lot of punch and power. We meet Tish, what seems to be your average teenager who thinks writing in a journal for class is stupid and definitely not worth her time.   She and her classmates have discussed how their teacher, Mrs. Dunphrey, allows students to write “Don’t Read” at the top of their entries that they want to be more private. Typical teenagers then think: What if I just wrote the same few lines over and over again?  What if I had some really juicy information and then my teacher started treated me differently? They would have her caught. Moving past the “what ifs”, the entire book is told through Tish’s entries and quick responses from Mrs. Dunphrey, most of which pertain to quick praise for the amount she has written and asking if Tish will ever allow her to actually read her entries, which happens sparingly throughout the novel.

Tish is a powerful and relatable character that Haddix develops well throughout, in a meaningful way. I think a lot of students can connect to her feelings about school, her family, some of her classmates, but I didn’t quite expect to hear about how difficult her life had been and had become throughout her entries. She continues her downfall and has to figure out how to be a teenager who acts like everything is okay, while she becomes the head of her household and in charge of her younger brother, all while keeping up with these stupid journal entries. Who knows, maybe those entries weren’t so stupid after all?

I must say, after some harsh reviews from a fellow colleague, I didn’t have many expectations when I began listening to this book. On the surface the premise

for this book- a girl who has this “gift” she notices when she kisses someone- was not the most enticing idea. BUT I must admit that I was pleasantly surprised and intrigued throughout it’s entirety. We meet Emerson, a popular high-schooler who is into what most high school girls are into: boys, her image, and definitely not her school work. She seemed rather shallow and annoying at first. Yet again, I was surprised. About a quarter of the way through the novel I thought to myself, well this girl has got to have some qualities that make you want to root for her, that make her more than just some ditzy teenager, and sure enough she progresses, she changes, she makes you want to root for her. Those are the best stories in my opinion; where the author doesn’t give you everything up front, they test your patience as a reader, but make you want to look for that redeeming quality that has just got to be in there.

As Emerson moves through the story, she figures out about this gift that she has almost accidentally. The interesting part is the way that she uses this “gift” throughout the rest of the book. You see that there are many layers to the somewhat superficial face she puts on in front of others, while her home life was never perfect, she battles relationship issues with her older sister and best friend, and struggles with her feelings, whether real or not, about her first potential true love. All the while, charmingly struggling through some hilariously embarrassing moments that will make you laugh out loud. And the symbolism that the make-up plays throughout was something that I hadn’t expected either- but it was nice for me to question how it all tied together and it certainly did! All in all, I would definitely recommend this carefree yet deep book to all my seventh graders, though I would assume girls would appreciate it most!

What if one day you looked up and saw someone watching you, like they knew you? But the next moment they were gone? Anna is mystified in the book Time Between Us by Tamara Ireland Stone
when this happens to her one early spring morning while she is running. A boy appears to be sitting in the bleachers at the track, but the next moment gone. When she goes up to investigate, the snow on the bleachers is undisturbed…except where the boy was sitting. Adding to the mystery, she goes to school and meets the very same boy, although he acts like he’s never seen her before, and denies being at the track that morning.

Quickly, Anna, realizes there is something strange going on with Bennett. He is at first friendly, then cold and harsh. Anna has no idea what is going on with him, but honestly, the truth is far stranger than anything Anna could come up with on her own. Bennett has the ability to travel through time and has to make decisions that will affect many peoples lives, including his own and Anna’s.

If you are looking for a romance that will keep you on your toes wondering how the pieces of the puzzle will fall, this is a great book for you. As with most time travel books, I felt like there were a few areas that were unclear, or didn’t totally make sense, but this is a fantasy after all, so some..okay, a LOT of suspension of belief is needed. I don’t think that will deter most readers though who are looking for a fun escape.

Recommended for 7th grade and up.

What happens when you find out your parents have been keeping a really big secret from you? Payton, in Sean Griswold’s Head by Lindsey Leavitt, is shocked to find out her dad has M.S. and has known for about six months. Turns out everyone in her family knew, but her. She stops talking with her parents and they reach out to Payton’s school counselor. Payton is told to find something to focus on and study to take her mind off of the issues at home. And Payton decides to focus on Sean Griswold’s head. After all, she’s been staring at it for most of her school career since they both have last names that start with the letter G.

Once Payton decides on Sean’s head however, she realizes she knows next to nothing about the boy. What ensues is a funny read with some serious undertones. Payton’s home life isn’t without complications as she tries to come to grips with how her father’s illness will impact all of their lives and what it means for her future, with or without Sean’s head in it!

Recommended for grades 6 and up. 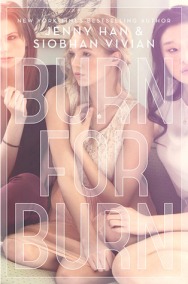 Burn for Burn written by: Jenny Han and Siobhan Vivian

Oh how I love myself a dramatic, girlie, contemporary fiction novel! Burn for Burn was a fabulous addition to my love of drama-filled high school romances and adventures. Written by Jenny Han (a favorite author of The Summer I Turned Pretty series) and new favorite Siobhan Vivian (author of recently read The List), this drama will leave with a great feeling of satisfaction. We’ve all had people that have “wronged” us and this group of girls, naturally all part of different clicks and groups at their high school, come together to seek revenge of those individuals that have indeed done them wrong. I believe that most of us who have been in high school and college, can connect to at least one of the story lines along the way of relationship disasters, jealously, and being queen bee! Some parts are a little mature, as it takes place with junior and senior high school students, but otherwise I do believe there is a great lesson and moral underneath all the intense and understandable drama! Loved it!