What happens when something you love, has the potential both to save you and possible be the cause of your death? Hanna is

faced with this after she is pulled for an audition for the Commandant of the work camp, Birkenau. She has already been taken from her home where she had a lovely life with her older sister, Erika, and her parents. Hanna was excited before the Nazis invaded her country of Hungary because she had been planning to got to the Budapest Conservatorium of Music. Hanna has a gift for playing the piano and when she is forced with her family to leave, it is her piano she misses and the time to play.

Once in the work camp of Birkenau, Hanna realizes quickly that she and her sister and mother must learn new ways to exist. With her father taken away from them at the gates of the camp, Hanna can only hope they will all be reunited at the end of the war, if they can last that long.

An opportunity comes for Hanna to play for the Commandant of the camp and while she doesn’t think she’ll get picked, when the Commandant’s son, Karl, specifically singles her out, she gets the job. Only later does she learn that her time may be precarious, since one wrong move, or note, can be the end of her time playing and possibly her very life.

Playing for the Commandant by Suzy Zail takes the reader on a journey to explore not only what it might have been like to have your life hang in the balance every day, but how would you have felt if you realized you were beginning to have feelings for the enemy? Hanna faces this dilemma as she finds herself failing in love with Karl, the Commandant’s son.

Good Holocaust book with a different perspective than others. Recommended for 8th grade and up.

She doesn’t understand at first, why she must keep certain things a secret. Growing up in Paris with a loving mother and father, Odette’s life is wonderful. She gets to stay after school with her godmother and father, who dote on her endlessly. However, even as Odette’s life seems perfect, the outside world isn’t. Often, her father and mother whisper into the night about Germany and Hitler and the Nazis. Odette isn’t sure at all what these things mean, being a little girl.

However, one day her father says he is going to join the French army to stop the German forces from taking over France. He is captured, and Odette and her mother go visit him in prison. But that is the last time they are able to see him. Not long after that, Odette’s mother tells her they must begin to keep secrets. One of those secrets is Odette must go live in the French countryside with other people. The biggest secret Odette must keep is one that could lead to her death if she doesn’t. The fact that she is a Jew must never come out, or it could mean capture for her and the people sheltering her. Can she keep this incredible secret?

Odette’s Secrets by Maryann MacDonald shares the story of a little girl caught up in the terrifying events of World War II. This story is based on the real life of a woman who was sheltered during WWII in France, and actual photos of her and her family add to the story. This novel in verse is a great book for anyone looking to learn more about the war and another Holocaust survival story.

Recommended for 6th grade and up.

Survivors by Allan Zullo and Mara Bovsum is a nonfiction book. This book has many different true stories of children in the Holocaust and the gruesome times they went through. One  story in particular stuck out to me where a Jewish family living in a town full of Jews knew that eventually they were going to get caught by the Nazis. They left their house and the family went farm to farm, hiding in haystacks. Then one day while this family was in hiding, they recognized a man and he was willing to take the family into his house to care for them, but what this family didn’t know though is that they were going to live in the man’s crawlspace. The Engelbergs, the family, hated living in there and didn’t  know if they could survive that dreadful time.

I enjoyed this this book because all the stories were so engaging and I wanted to keep reading. It is a shorter book, only 196 pages, but the content was sometimes confusing to me because of the many German words in it. I think this book is good for young teens. If you liked Chasing Lincoln’s Killer, you’ll like Survivors even better.

Written by Kathy Kacer, Hiding Edith, is a true story about Edith Schwalb.

Edith Schwalb was a young Jewish girl living in Vienna, Austria in 1938. Life in Vienna was changing because Hitler began targeting Jewish people. Hitler and the Nazis made life difficult for many Jewish people in Germany and the countries surrounding. To ensure their safety, Edith’s family had to leave their home in Vienna and move to Belgium.

It wasn’t long before Edith was then forced to leave Belgium. Separated from her family, Edith was sent to a school in France. This school took in Jewish children secretly and kept them safe. Edith had to learn how to live without her family. Eventually no countries were safe from Hitler and his invading army – the school got news that the Nazis would be coming to look for Jewish children! With nowhere left to run, Edith was forced to change her identity and forget her Jewish heritage.

Written by Kathy Kacer, Hiding Edith, is a true story about Edith Schw

I read The Boy In the Striped Pajamas by John Boyne. 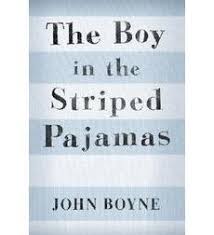 It’s 216 pages long and is a historical fiction book. The Boy In the Striped Pajamas takes place during the Holocaust. It’s about a young boy named Bruno who lives in Berlin and his dad is a soldier. The family moves away to a town called Outwith and Bruno, his mom and sister don’t really like it there that much, but Bruno’s dad does.

Bruno goes out exploring one day and he comes across this gigantic fence. There’s a little boy just sitting there looking sad. Bruno starts talking to him and finds out his name is Shmuel.

The two boys become best friends and one day Bruno goes inside the fence and something happens  – but you have to read it to find out!

This is one of my favorite books!

I will say that Historical Fiction is usually my least favorite genre of literature, so much to my surprise as I could not put this book down! In having read various texts centered around the Holocaust, I was hoping that I would learn something new after having read this one, and I must say that I really seemed to notice the fight and struggle that the main character was having. The way the author wrote, I felt as if I was going through the same emotions as our main character, Yanek, as he was forced into numerous concentration camps. The author doesn’t waste any time and wrote in a way that at times seemed almost brief. But you come to realize that this young boy didn’t have time, energy, or the drive to stop and dwell on the hardships that surrounded him, which mirrored similar strategies that the author used throughout.

One part that was really powerful about a half-way through the book was when Yanek’s thought, “I started to cry, the first tears I had shed. Why had I worked so hard so survive if it was always going to end like this? If I had known, I wouldn’t have bothered. I would have let them kill me back in the ghetto. It would have been easier that way. All that I had done was for nothing” (126-7).  You really get the sense of his helplessness and lose of hope. You’ll have to read this fast-paced novel to see if Yanek’s hope, or lack thereof, can pull him through the toughest struggles anyone could be asked to endure.

Marion, her parents, and her brother Albert (the four perfect pebbles) are Jewish. Her story begins in Hoya, Germany in the 1930s. Things started to change as Adolf Hitler and the Nazis came to power. Marion’s family is forced to leave their hometown because Hitler was working on making Germany free of Jews.
The Blumenthal family moved around to stay safe from Hitler. They hoped to make it to the United States of America. Coming to America wasn’t an easy task. The family was tricked into thinking they were traveling to Palestine to be finally be free and were returned to Germany to live as prisoners in a camp for Jewish people.
Marion’s experience at camp is nothing short of unbelievable and shocking. Many Jewish people were crowded into rooms with no bathrooms or showers in sight. It was dirty and lice were everywhere. There wasn’t enough food or water. People were getting sick and dying from lack of food or the conditions that were around them. Getting on a train to leave was often a death sentence for Jewish people at camp.