This book is a collection of essays about hope from some amazing authors such as Libba Bray, Ally Carter, James Dashner, David Levithan, Marie Lu, and Jason Reynolds. The editor explains this book better than I can in her introduction. She says:

“What is Hope Nation? Simply, it’s a collection of unique and personal experiences shared by some of my favorite writers for teens. Stories of resilience, resistance, hardship, loss, love, tenacity, and acceptance– stories that prove that sometimes, hope can be found only on the other side of adversity.

Mr. Rogers of Mr. Rogers’ Neighborhood once said that during a crisis, it’s vital to look for the helpers. The authors featured in Hope Nation are our helpers.”

This is the second book in Marie Lu’s new trilogy.  She is the same author who wrote Legend, Prodigy, and Champion, which are all set in a futuristic society.  In this new series, though, readers are taken into the 14th century.  In the kingdom of Kenettra, a blood fever wiped out most of the population.  Any adult with the fever died brutally and painfully, but some children survived.  These surviving children were marked in some way… with vivid hair colors, loss of limbs, discolored eyes… and became known as malfettos.  The luckiest malfettos were granted exceptional powers in addition to their physical scars.  And the most powerful of these became known as The Young Elites.  In the first book in this series, we learn that Adelina Amouteru is a powerful Young Elite.  She is an illusion master, and can make people see, hear, smell, and feel whatever she wants.  She can use this power to create happiness, or use it to cause intense suffering.  In addition, her powers feed off of terror and rage, so she is actually at her strongest when others are in pain.  Terrified of this darkness, the rest of the Young Elites cast her out as an exile.  And that is where this story opens.  As Adelina writes of her own story, “Once upon a time, a girl had a father, a prince, a society of friends.  Then they betrayed her, and she destroyed them all…”.   This book is beautifully written, and readers will feel horrified as they watch Adelina turn into the villain of her own story. 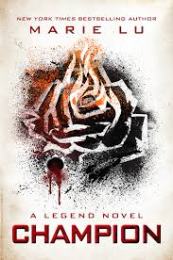 This final book in Lu’s Legend trilogy has all of the intrigue, action, and danger found in the first two volumes.  June has been chosen by new Elector Anden to serve as one of three Princeps-Elect, his closest government advisors.  Meanwhile, Day is acting as a commander in the military, but suffering from severe headaches and black-outs as a result of the experimental tests run on him by the government.  Day and June have not seen each other since the conclusion of Prodigy, and now June is urgently requesting to see Day.  However, despite his continued love for her, the favor June has to ask might be too much….  Like Lu’s previous books, this one is intelligent, fast-paced, and heartbreaking.

Legend by Marie Lu starts Day (Daniel) and June’s stories, each coming from opposite sides of the Republic. The Republic is the western part of what’s left of North America after severe flooding from melting ice in the north. The United States is no more in this futuristic novel.

Day is poor and forced to a life of crime to survive, help his family, and stop the advances of war. He’s a wanted criminal on the run, hiding out while still keeping watch over his family. Day’s antics have made him a legend in the Republic.

June is from an elite and wealthy family. She’s considered a prodigy for being the only one to get a perfect score on her trials. The trials are tests run to find the best soldiers for the military. June is on her way to securing a high ranking spot in the Republic’s military.

Day and June’s paths cross and both characters face good and bad events. They are each forced to question their own allegiance to family and their country. They must figure out who they can trust when things begin to get dangerous.

Prodigy is the follow up book to Legend. In Prodigy, Day and June are no longer on opposite sides of society. Both are forced to work together to survive and figure out if their allegiance belongs to the Republic, the Colonies, or the Patriots.

I read both books back to back because one of my students, Jayla, has raved about these books for months! She said they were full of action and I have to agree with her! If you are looking for a story full of action right from the beginning – read Legend & Prodigy! Both books alternate chapters between Day and June but tell the entire story from both of their perspectives. Not only do they contain lots of action, there’s also a bit of romance too so both male and female readers can enjoy this series.

The finale to the Legend trilogy, Champion, will be released November 5, 2013. I know Jayla is eagerly anticipating that day to find out how this story wraps up.

In interviews, the author, Marie Lu, has mentioned that Legend is being worked on for a future movie!

One Teen Against the System and One For It November 25, 2012

What do you do when your whole world is collapsing around you? That is what is happening for Day and for June. For Day, a wanted criminal in the Republic who has just found out his family has the plague he knows he must find a cure or watch them die. For June, her brother

and only family member left has been killed, supposedly by Day. She must bring Day in to avenge her brother, but what happens when things don’t go as planned for either of them? In Legend by Marie Lu, both June and Day are characters you are rooting for, wanting them to get beyond their own beliefs to see each other as we, the reader, does. June comes from a privileged background and has her life set before her, with only good things as far as she can see. It is only when her brother is killed that she begins to realize he was trying to let her in on some of the secrets surrounding the world she has never questioned before. Day, on the other hand, has seen the brutality of the world in which he lives and strives so hard to keep part of his humanity alive, even as it becomes harder day by day. Set in a future where the haves and the have nots are clearly defined, June and Day must navigate the world they find themselves in, without compromising who they are totally.

This book keeps you moving forward quickly and with enough twists that the end isn’t totally foreseen  Even in a time when, frankly, I’m pretty tired of the futuristic dystopian books that seem to be published on an hourly basis, this one had me caught almost from the very beginning.