The Selection Book Review by 7th Grader Kaylin May 9, 2018

The Selection by Kiera Cass is the best book ever! It’s about a girl named America and she joined a competition called The Selection. America was in love with someone else when she got selected. She reluctantly went to the competition where the Prince was choosing his wife from 35 girls. America didn’t think she would fall in love with the Prince but she couldn’t resist how nice he was.

The book is so suspenseful! I had so much emotion in the book than my whole life of living. Things would go good and then bad real fast. I fell in love with Aspen and then he made horrible decisions and then my heart went to the prince, Maxon. Maxon is now my NEW Shawn Mendes!

This is the best book I have ever read because there is such a great love story. This book also is so suspenseful. I fell in love with Aspen then he made a terrible decision that made me mad. Then after meeting Maxon, I fell in love with him and have not gotten over him since.

If you haven’t read the first 3 books of The Selection Series, stop reading this and go check them out now!

Daughter to Prince Maxon and the first born of his family, Princess Eadlyn is the heir to the throne. Times have changed in Illéa. It’s 20 years after Prince Maxon chose “The One” during “The Selection.”

The caste system is gone but that hasn’t created peace in the country. Prince Maxon and Queen America decide one way to bring Illéa together is to bring back The Selection after all this time. They decide Princess Eadlyn needs to find the perfect match to wed and help run the county when it’s her time to take the crown.

Much like her mother, Princess Eadlyn doesn’t want to be a part of The Selection. In fact, she doesn’t even see herself ever getting married. Princess Eadlyn enters The Selection tough as nails and refuses to let her guard down for anyone. Although this is a very different story, it is a must read if you’ve read the other books in the series!

Straight from Kiera Cass’ mouth: there will be ONE MORE book in The Selection series and that’s it!

That’s me meeting Kiera Cass and getting my book signed!

The One (3rd book in The Selection series)

While this series has kept me on the edge of my seat, the much-anticipated third novel was probably the best yet. Now that we have really gotten to know the ins and outs of these characters and girls competing to win the prince’s heart, Kiera Cass focuses on the constant struggle between castes as well as the various rebels against the prince and his family overall.

Within the last book, we left the prince with just a handful of suitors left for him to choose from. As we continue to guess which girl who will ultimately end up with, we also get to know more about the responsibilities as a princess, as well as the struggles the individual girls face when some of their families become in danger due to the war going on around them. There are so many dynamic relationships, characters, conflicts, and events that you too won’t be able to put this book down!

It’s not too often that we see a series continually get better and better with each book and I’m so glad that Kiera Cass was able to do so!

Dystopian novels are incredibly popular right now, most of us can’t get enough of them!  However, when you think about the genre, most are incredibly dark and depressing.  The world has ended as we know it, there wars, zombies, aliens, etc.  The Selection by Kiera Cass gives readers a lighter side to the genre; a love story.  The setup is still dy

stopian, after many wars the world has moved to a strict caste system in which people are born into their rolls in society, but the caste system really just provides an interesting background for the story.  The main character, America, is selected along with 35 other young women to complete to marry the crown prince Maxon.  Initially, she rejects the game and the prince himself for the love of  a servant back home.  As the story progresses, both her relationships with Maxon and Aspen (the boy back home) change.

As with most books published recently, this is the first in a series.  I personally can’t wait to see what happens to Lady America in this twisted dystopian love story.

For lots more details both about the book and author, check out Kiera Cass’ website.

Finally, The Bachelor (a favorite reality television show of mine for years) has come into play in YA literature! I had heard about The Selection from many of my female students this year. They urged me to wait until the second book (The Elite) came out to read them right after one another, as Kiera tended to leave things in a cliff hanger. Sure enough, I could not put either book down when reading. 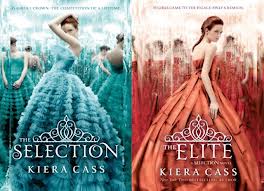 The Selection takes place in a futuristic world where the prince is looking for his princess. 35 girls are selected to go through a “Bachelor-type” process and fight for the prince’s love. All the while, the society is built into a caste system where girls from all castes are able to apply. Our main character, America, ends up being part of the Selection, despite having little confidence in herself, nor interest in the prince. America remained one of the only lower-caste young ladies in the process. She cleverly showed her true colors very early on to Prince Maxon, as she gave him the idea for her to be a “friend” in the process, since she was in love with someone else (Aspen); one who could help weed through the large amount of young ladies. However, as time progresses, America is beginning to become jealous of the other girls and their relationships with Maxon- and why would that be? Could she be interested in him as more than a friend? The first book ends up with Maxon cutting the Selection numbers down to The Elite, which are the six remaining girls.

As the story unfolds in Book two, I was interested to see where the story was going to go. I was thoroughly impressed with the writing, as it continued to entice me and want to keep reading, as there were many twists and turns along the way that I did not see coming. Without giving too much away, America finds herself in the middle of a love triangle, in a physical altercation with another contestant, fighting for her friend’s life and love, and standing up for herself and her country unlike anyone else has ever dared. Again, Book Two leaves you on the edge of your seat wondering just what will become of Maxon and who his princess will be. I know many of my students and I are counting down the days until Book three comes out!

**Also, it may be that there will be a television show on the CW of the book series. Fingers crossed!**